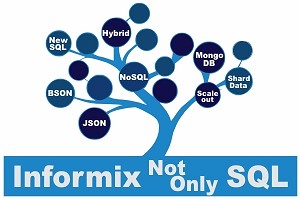 With the in September 2013 released version 12.10.xC2 Informix has now JSON compatible NoSQL functionality available. With that the IBM pushed the door to BigData once more wider open for Informix.

Now a third important building block is added to Warehouse Accelerator and TimeSeries functionality: The from relational scheme deviating storage and converting of data in the for webapplications widely spread Java Script Object Notation (JSON).

Therefor the set of native datatypes for Informix was expanded by JSON, respectively by the binary equivalent BSON. During the expansion of the scope of functions the compatibility to the widest spread NoSQL database - MongoDB - was respected, so that MongoDB applications can also be run mostly directly with Informix.

The first noteworthy introduction of NosQL for Informix occured in the end of September in the "Chat with the lab webcast" by Jerry Keesee and John Miller. The topic is still barely present in the web. The Informix NoSQL presentation of the IBM offers a good entrance and explains the basic terms and relations.

This site uses cookies to make it easier for us to provide you with our services. By using our site you agree to the use of cookies.
Ok Decline
More information Imprint